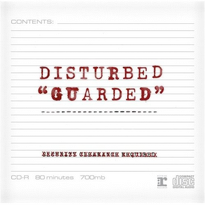 Write "Guarded" is a song by the American heavy metal band Disturbed. The song was released on June 28, 2005 as a promotional single from their third studio album, Ten Thousand Fists. It was the first single featuring their new bassist John Moyer. "Guarded" is featured in the soundtrack of the film Saw III.

According to vocalist David Draiman, "Guarded" is about how his lifestyle forces him to guard himself. He said, "It's a song that reflects what choosing this life forces certain people to do in a certain way — you have to remain guarded on a certain level."

"Guarded" was released to radio stations as a promotional single on June 28, 2005. Vocalist David Draiman said, "[The song] was put out there to just whet everybody's appetite. It's one of the more aggressive tracks on the record, just to remind everybody where we came from and who we are. Kind of give back to the core a little bit."

Community content is available under CC-BY-SA unless otherwise noted.
Advertisement